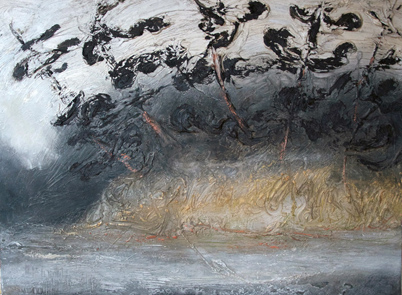 John Eaton was born in Ottawa in 1942. He attended High Mowing School in New England, with special emphasis on painting and drawing. For three years following this he travelled in Europe, working in Yugoslavia and Greece and as an apprentice to a marble sculptor in Florence, Italy.

From 1961 to 1967 he had a studio in New York and taught drawing at the Waldorf School of Adelphi University. During this period, his pictures were used for multi-media poetry and dance recitals at the Lincoln Centre, the Donnell Library and the Cubiculo Theatre, New York.

In 1965 he illustrated "Fairy Tales" by E.E. Cummings published by Harcourt, Brace and World.

In 1967 he assisted with the murals in the Pan-Am Building in New York.

In the late sixties, John Eaton moved to Rupert, Quebec, renewing his connection to the Gatineau Hills and pursue his vocation as an artist. To this day, he continues to prosper through private sales at his studio gallery in Rupert, Quebec.